Add this event to any of these calendars

09:05 – 09:25 Dr. Zhong Nanshan, Zhong Nanshan is director of the National Clinical Research Center for Respiratory Disease, an academician of the Chinese Academy of Engineering, and a leading Chinese expert in preventing and treating respiratory infectious diseases.

09:25 – 09:40 Dr. Manson Fok: Surgeon, research pioneer and philanthropist. Dean of Faculty of Medicine at Macau University of Science and Technology (MUST) and Director of the MUST hospital. Launched the city's first degree course to train doctors. Founding chairman of Virtus Medical Group.

09:55 – 11:10 Dr. Billy Chan, philanthropist and Director of Center for Education in Medical Simulation, Macau University of Science and Technology.

11:10 – 11:25 Prof. Brian Tomlinson is currently Professor in the Faculty of Medicine, Macau University of Science & Technology, Clinical Professor (Honorary) in the Department of Medicine and Therapeutics and Adjunct Professor at The Chinese University of Hong Kong. Besides, he is currently Chair of the Asia-Pacific Federation of the International Atherosclerosis Society (IAS) and immediate Past-President of the Asian-Pacific Society of Atherosclerosis & Vascular Diseases. 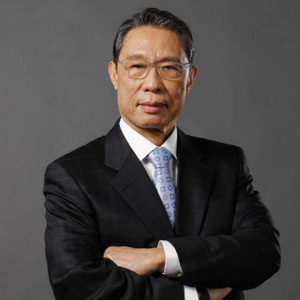 Professor Zhong is national leader in the prevention and treatment of major respiratory infectious diseases, chronic obstructive pulmonary disease, bronchial asthma and other respiratory diseases in China. He has published more than 540 international peer-peer papers (Total citations: 10,800, H-index 50), on world’s top medical journals such as NEJM, Lancet, and JAMA. He also published more than 400 papers in national journals sponsored by the Chinese Medical Association; and various monographs <Asthma: From Basic to Clinical>, <Internal Medicine Textbook>, <Respiratory Diseases> he had nearly 60 invention patents. His practical and scientific treatment experience contributed a lot to public health policy shaping of China &Global in every pandemic incident.
During the SARS outbreak in 2003, Prof. Zhong opposed the view that typical chlamydia was the cause of SARS. His expertise provided a scientific basis for treatment decision-making in time. Professor Zhong’s team explored "three earlies and three rations" treatment protocol in a short time, namely, early diagnosis, early isolation, early treatment, rational use of corticosteroids, rational use of ventilators, and rational treatment of comorbidities). This protocol contributed to the 3.3% SARS mortality rate in Guangdong, which was the world's lowest SARS mortality rate.
Professor Zhong has been leading the development of a number of Chinese guidelines for the diagnosis and management of bronchial asthma, COPD, chronic cough, SARS, highly-pathogenic avian influenza and COVID-19. Since March 2020, Professor Zhong has attended more than thirty international webinar meetings on epidemic prevention and control, including the US, the UK, France, Germany, Italy, Spain, Canada, Japan, Korea, India, Iraq and Nepal. The meetings aimed to share the Chinese experience to help these countries to deal with COVID-19 epidemic. He has also called for greater attention to the spread of novel coronavirus in a number of countries, addressing the importance of implementing the “Four Earlies” principles: early protection, early detection, early diagnosis, and early isolation. In September 2020, he was nominated as a member of COVID-19 Independent Panel for Pandemic Preparedness and Response, WHO.
Professor Zhong, shouldering the responsibilities in the outbreak of three coronavirus events this century, has made great efforts in clinical diagnosis, medication, scientific research and governmental strategies. He proposes “One world, one fight” to gather all the resources and strength to fight against the epidemic. Son of the late Dr. Henry Y.T. Fok, Vice-Chairman of the National committee of the Chinese People’s Political Consultative Conference of the PRC, a well-respected entrepreneur, philanthropist and passionate leader in promoting international sport diplomacy. Professor Manson Fok is a medical doctor married in 1985 with three children currently residing in the Hong Kong SAR.

Professor Fok assumed Chairmanship and director of Virtus Medical Group, one of the largest all-rounded medical specialist group in Hong Kong & Macau SAR, providing excellent specialist healthcare services to the big bay area of Peoples’ Republic of China (PRC) and beyond. Professor Fok also serve as Director in several medical biotechnology companies in his promotion of medical discovery to address major unmet medical needs, such as cancer and serious infective diseases. He is currently the Chairman of Avalon Biomedical Management (HK); Board directors of Shanghai Pharma, the second largest listed pharmaceutical company in PRC; and in Athenex Inc., an oncology innovation biopharmaceutical company listed in NASDAQ.

He is an executive board member of several Foundations, Professional Committees and Medical Associations, including as Censor-in-Chief of World Chinese Doctors’ Association, Honorary Fellow of the Chinese College of Surgeons; Honorary Fellow of Brazil Medical Association; President of Sino-Luso International Medical Forum; President of Macau Healthcare Management and Promotion Association; Executive & Trust Committee member of Macau Henry Fok Foundation; Executive member, Dr. Stanley Ho Medical Development Foundation; and as Professional Committee member, Macau Academy of Medicine; and as committee member of the Council of Medical Affairs of Macau SAR. Over the past seven years, Professor Fok and his team has played a pivoting role in building strong bridges for international cooperation in healthcare education, training and charitable healthcare services, between PRC, the Portuguese speaking countries, and various countries of the Asia-Pacific region. Director, Center for Education in Medical Simulation, and Executive Assistant to Dean of the Faculty of Medicine at Macau University of Science and Technology

Dr Billy C. Chan is currently the dean of Health Sciences at Macau University of Science and Technology (MUST) and Director of the MUST hospital

He is also the Vice Chairman of the Advisory Board at the Macau Healthcare Promotion and Management Association. He is a Standing Committee Member of the International Trauma Rescue and Treatment Association in Beijing, and Honorary Consultant for Peking University Peoples Hospital in Beijing. He is also an Honorary Professor at the First School of Clinical Medicine BUCM, and Executive Council Member of the World Association of Chinese Doctors.

For the Portuguese speaking world, he is an Honorary Member of the Brazilian Medical Association, and Honorary Vice President of the Angola Chamber of Commerce in Macao for Medical Affairs. He is also the Co-Founder of Sino-Luso International Medical Forum, promoting healthcare education and skills training between Macau SAR and Portuguese Speaking Countries.

Dr Chan is a regionally acknowledged frontrunner in healthcare simulation. Over the past 19 years he has contributed to the arena of medical simulation by introducing skills training programs to advance positive outcomes and reduce errors in the Commonwealth of Australia, New Zealand, Hong Kong SAR, Macao SAR and mainland China. Aaron is a Director in Deloitte’s South China Business Development team based in the Guangzhou office. With a diverse network and broad experience in international business, Aaron helps his clients in developing best practices for international business, accounting, taxation, as well as seek investment and development opportunities. Aaron is also supporting the Deloitte’s Greater Bay Area (GBA) Initiative and is leading the development of a hospital collaboration platform so that hospitals around the GBA can better coordinate best practices. Before re-joining Deloitte, Aaron was the Greater China Group Tax Manager for Procter & Gamble. In 10 years with Procter & Gamble, Aaron performed a multitude of tax and finance roles. Aaron has 20 years of tax experience including 16 years in China.

Aaron was a member of the Board of Directors of the American International School of Guangzhou, the leading international school in South China, from 2010 to 2019. During that time, he served as Treasurer, Vice-Chair, and Chairman of the Board.

Aaron is a member of the Board of Governors of AmCham South China. He was recently the EU Chamber of Commerce Finance & Taxation Working Group National Chairman and is currently the Vice Chairman (South China Chapter Chair). He is an Advisor to the Guangdong Investment Promotion Association, an expert of the Guangzhou Capital Market Pool, and a contributor to the Guangzhou City Business Environment Study.