In this webinar, we will share with you some of the best practices in protecting trademarks and trade secrets in China. The enforcement system in China can be complicated and sometimes confusing to people who don't have a lot of experiences in dealing with the system. It would only work efficiently and effectively if you find the right approach and apply the best strategy. Our firsthand experience will help you understand what works and what should be avoided.

We would like to keep the webinar as inactive as possible, you will have opportunities to ask questions and get straightforward answers from the speaker.

Topics to be covered:

WANHUIDA Intellectual Property is a leading IP firm with over 470 attorneys and supporting staff working in all of the major IP hubs in China, including Beijing, Shanghai, Guangzhou, Shenzhen, Hong Kong, Hangzhou, Tianjin and a few other major cities. We offer comprehensive services from trademark/patent/copyright filing, prosecution, enforcement, litigation, portfolio management and general consulting on intellectual property issues. Our major clients include many multinational companies and domestic industry leaders, and we also serve over a thousand SMEs. WANHUIDA has been ranked a Tier One IP firm in China by all of the mainstream IP media, domestic and international. 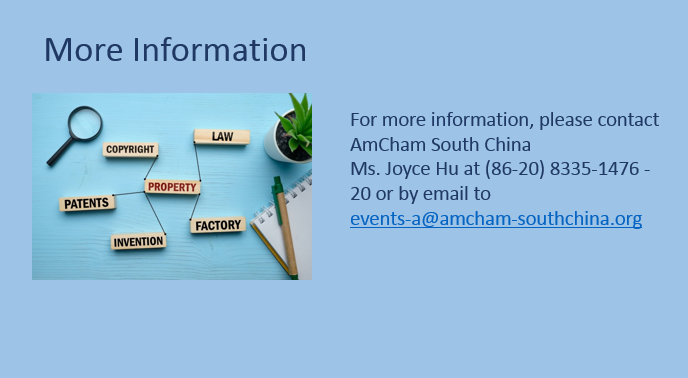 David C Buxbaum who was born in New York, has been primarily resident in Asia since 1963, in China since 1972; and in Mongolia from 1990. Mr. Buxbaum has a BA (NYU), JD (University of Michigan), MA (University of Washington) and a PhD (University of Washington), the latter two degrees in Asian law, with a specialty in Chinese law. Mr. Buxbaum was a fellow at Harvard University of 1962-1963. Mr. Buxbaum left academic life where he taught law, including Chinese law in the USA and Singapore, to join the law firm of Anderson, Mori & Rabinowitz as a junior partner in 1968, where he worked primarily on joint ventures for American companies in Japan and on Hong Kong legal matters. In 1970, Mr. Buxbaum formed the Asian offices of the predecessor of the firm, Anderson & Anderson, LLP, and continued to be active in USA legal practice, particularly in corporate finance, securities and commodities fields.

Mr. Buxbaum is fluent in both oral and written Chinese. He was the first American lawyer invited to China to represent American business interests in 1972, after President Nixon’s historic visit. He founded the firm’s first office in Guangzhou (Canton). Subsequently, the predecessor firm opened offices in Hong Kong, Beijing, Shanghai, Xiamen, Shenzhen, Chongqing, Chengdu and Mongolia and closely affiliated offices in Bombay, India. Mr. Buxbaum is a well regarded expert on private international and Asian law who, in addition to being an experienced and highly respected practitioner, has also published extensively in the field. He was originally the primary author and reviser of the China Law, Mongolia Law and Macau Law Digests for the Martindale-Hubbell directory until 2007.

In addition to international transactional matters and work in the securities and commodities fields, Mr. Buxbaum, is also professionally active in litigation, particularly regarding international business disputes, intellectual property and commodities and securities matters. He represented the successful respondents before the United States Supreme Court in the landmark case ofButz v Economou 438 U.S. 478 (1978) successfully handled a leading IP case in China, namely Microsoft vs Juren (Zhong jing zhi chu zi No.586, 1994), which trial was broadcast nationally in China; and he has been active in litigation and arbitration in China, Japan, Mongolia, USA, and Hong Kong.

Jason Yao is a Partner at Wanhuida Intellectual Property and a Member of the firm’s Management Committee. He is also the man Kong Office. Mr. YAO's practice covers a wide range of intellectual property matters, including litigations on disputes over tradema and enforcement against trademark counterfeiting, patent infringement and piracy through administrative and criminal actions, lice copyrighted works; handling compliance programs and government investigations on unfair competition and antitrust matters; prov relation, and crisis management.
He has been highly regarded by clients for his profound knowledge of intellectual property issues, his sense of urgency and respo complex legal issues.
Mr. Yao has a unique combination of in-house and outside counsel experience in managing intellectual property portfolios and cor companies. Mr. YAO joined Proctor & Gamble Company as an in-house legal counsel after law school in 1996. He led the brand p thousand cases in 7 years, some of which were the very first such type of intellectual property cases in some local cities and provi property law at Boston University School of Law, Mr. YAO joined Gillette Company as the general counsel for the Greater China re investigation and enforcement against a counterfeit syndicate and worked closely with the management team in consolidating the Procter & Gamble Company, Mr. YAO joined Acushnet Company, the world’s largest golf product manufacturer, where he served a general legal matters in the Asia/Pacific region. He successfully coordinated the major US golf manufacturers and put together a c collectively against counterfeit and pirated products in the region and achieved significant results.
Mr. Yao served in the Quality Brands Protection Committee (“QBPC”) of China Association of Enterprises with Foreign Investment Committee Chairman and the QBPC Vice Chairman for over 10 years and had worked with the legislative authorities, the judicial d the improvement of the legislation and enforcement concerning intellectual property rights protection in China.
Mr. Yao is a frequent speaker in many international and domestic conferences and seminars on intellectual property issues, corpo committed in building connection with law schools and having regular communications with the law students regarding intellectual
property. 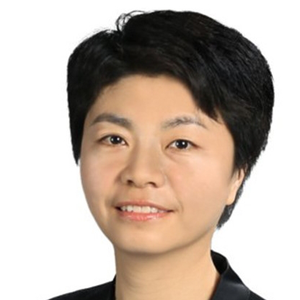 Personal description
Feng (Janet) Zheng is a Partner at the firm’s Beijing office. She practices in the areas of intelle and trademark related matters.
Feng has served both multinational and domestic corporations in patent enforcement, patent in administrative litigations, civil and criminal trade secret cases, copyright infringement and owne disputes over technology agreements. She also advises clients on matters concerning anti-trus

WANHUIDA Intellectual Property is a leading IP firm with over 470 attorneys and supporting staff working in all of the major IP hubs in China, including Beijing, Shanghai, Guangzhou, Shenzhen, Hong Kong, Hangzhou, Tianjin and a few other major cities. We offer comprehensive services from trademark/patent/copyright filing, prosecution, enforcement, litigation, portfolio management and general consulting on intellectual property issues. Our major clients include many multinational companies and domestic industry leaders, and we also serve over a thousand SMEs. WANHUIDA has been ranked a Tier One IP firm in China by all of the mainstream IP media, domestic and international.